Today I fixed Little B’s Nook Color.  Last week she came to me sobbing.  She’d dropped her nook from her bed and it landed screen-first into a chair.  The LCD was shattered. 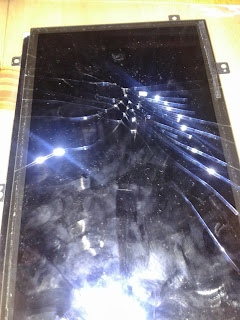 I followed this YouTube video to disassemble the nook.
Warning: This video is WRONG about one part of the disassembly.  Removing the front bezel before removing the LCD and PCB damages it.  There is a small brass bushing molded into the bezel that is ripped out of the plastic by doing it this way. 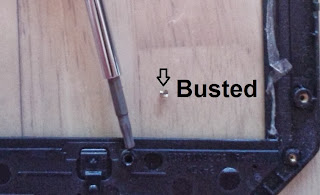 If you reuse the same bezel you won’t notice this, but installing a new bezel will cause an ugly hump in the plastic next to the “n” button.  Instead you have to pull the Bezel/LCD as an assembly to get to the screw holding this bit on.

The corrected the disassembly procedure is: 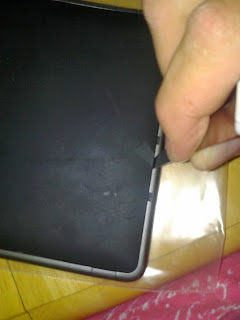 The PCB/LCD disassembly matches the process in the video.

Reassembly tips:  When replacing the back cover of the nook put the microSD slot cover corner together first.  It won't snap in properly if you leave it for last.  Also double check to make sure the power and volume buttons are lined up neatly before you screw it all back together.

I got my parts from this ebay auction “Nook Color Display and Digitizer Assembly”   by the seller wallachee.  It is the complete LCD/Digitizer assembly with the bezel.  The auction describes it as used, but the one I got was flawless.  I would have guessed it was NOS if I didn't know better.


Post-nook-fixing we had dinner at the Bell Buckle Café and I played Modern Warfare on the xBox with Big B.  He gets hilariously annoyed when I kill him in the game.  Muahaha.

Posted by Elizabeth Greene at 10:16 PM