The one were I eat brazilian, gripe about Universal, and fix a bike

Today was another lovely day.  I was at work by 8:15; that's good for me.  The AD project is coming along nicely.  Another month and we'll be done.

After work I ate an early dinner at Sabor do Brazil.  It's a Brazilian buffet here in Marietta.  It's not a traditional guys-with-swords Brazilian place, this one actually had a bar you walked up to to get your dishes.  I wanted to try everything,so I had a tablespoon of everything.  I was surprised at the seasoning of the food.  It had flavor, but not the spiciness typically associated with Central and South American dishes.  The yellow rice with beef was especially good.  There was also another chicken dish that tasted like Indian Tandoori Chicken.  Very nice.


The layout of the restaurant was confusing and chaos inducing.  I could have probably done better for my $13, but I left full and happy.

Maybe tomorrow I'll go back to the little Jamaican place?


I stopped and rented a couple of Redbox movies on the way back to the hotel.  Unfortunately, these will probably be the last movies I ever rent.  Why?  You ask.  Allow me to elucidate.

I rented Oblivion.  Fantastic movie, by the way.  Even if it was filmed with finger puppets with Carrot Top as the voice talent I still would be unable to resist a post-apocalypse sci-fi movie.  Just. Not. Possible.  On top of the story It was phantasmagoric and beautiful.  I could make a year's worth of desktop backgrounds just from hi-res screencaps.  Absolutely amazing.  I couldn't not love this movie.

I have a couple of minor science issues, but they didn't hurt the movie at all.  <spoiler>
First, do we really think that destroying the moon will cause massive destructive earthquakes and Tsunamis?  I don't think the math works there.  Maybe if big chunks of the moon fell into the ocean that would cause Tsunami.  That's much more plausible.  Something like Lucifer's Hammer perhaps?  (It's a book by Larry Nivens and Jerry Pournelle.  You should go read it yesterday. )
Second, why would you mine earth for water?  Europa is right there, has a teeny-tiny gravity well, and won't fight back.  Just sayin'.
</spoiler>

So here's the gripe.  I finished the movie and blink into the Bonus features menu.  Time to grab some of those aforementioned screen-cap desktop backgrounds.  WTF?  Universal Pictures has, in their infinite wisdom, hacked all of the bonus materials out of the DVD.  Yes, seriously.  No, I didn't hallucinate this, you can see the screenshot. 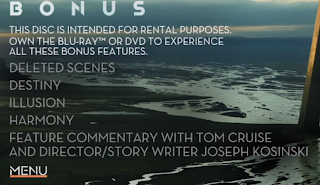 So let me make sure I understand completely.  I can go drive to the store, pay a buck to rent the movie, drive home, watch the movie, no bonus content,  drive back, and return the movie .

I can ease on over and download one of the 50ish blu-ray torrents with no driving, no paying, and the guaranteed-delicious bonus content?

Finally tonight I fixed my bike.  This was a hand-me-down.  I de-rusted and lubricated the chain and replaced a couple of cables.  It's riding-ready now. 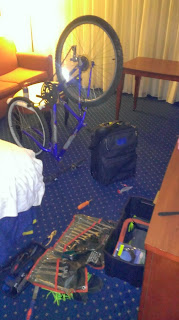 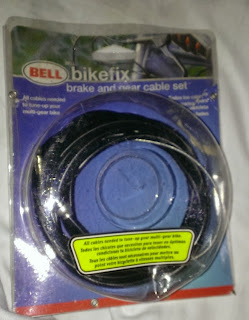 Another day in the book and the to-do list is just as long as when I started.  It was a good day.
Posted by Elizabeth Greene at 11:57 PM