I've got a number of trouble codes that point to a vacuum leak.  I pulled off the engine covers and started poking around.  I found that the crankcase breather hose between the cylinder heads has taken on the consistency and structural integrity of an overcooked spaghetti noodle. 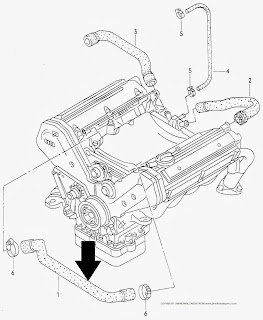 
I've discovered that Auto-Zone Heater Hose Part number 80416 "Dayco/Hose (Lower)" can be trimmed to an acceptable fit for replacement.  It costs $10.99.  I was originally concerned that the hose would collapse under vacuum, but in initial testing that has not been an issue.  If it becomes a problem I will insert a length of 1/2" ID Convoluted Tubing (the stuff you use to organize wires into neat bundles) in the long section.

Here is a terrible picture of the completed installation. 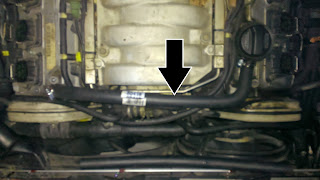 I hope this helps someone else.

Posted by Elizabeth Greene at 11:49 PM

Nice!I have 1999 audi a8 quattro also. I took off the covers last night to change a few ignition packs and found my vent hose to be disintegrating and with a large hole in it. I will try your version of replacement. Did you notice anything different after you changed it? my email is prokster@hotmail.com

Yes, after changing it the engine went from 12 trouble codes (including misfires on every cylinder and a system running too lean error) to 1.

I'm happy with the repair on the front hose, it works great. The rear two hoses don't really fit right, and I would prefer to have the correct parts for them. The cheapest I was able to find them was around $85 each. I'm hesitant to spend that unless forced.