Replacing the Clockspring on a 2004 Dodge Grand Caravan

Ty has a minivan.  Earlier this year the turn signal failed.  It literally fell apart.  That was an easy (5 screws, 2 connectors) fix, but the turn signal would not auto-cancel when you turned.

I did some digging online and the turn signal cancel cam on this model is attached to the back side of the airbag clockspring.  I thought mine was probably broken.  I was right.

Here is the busted part.  That little brown thing with the horns is supposed to be permanently attached to the black thing. It's not. 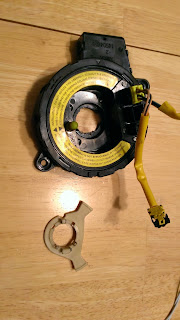 This is actually my second one of these to replace.  The first one was in an older Grand Caravan.  It had failed internally and made the airbag warning light come on.  The first part I got from the dealer for just under a hundred bucks.  The second one I ordered from RockAuto for half the price.

My model is several years newer, so there are some differences.

First, you have to point the wheels straight ahead before disassembly.  This is important.
Second, my airbag connectors had little tabs on the side that had to be squeezed to remove them.
Third, I had a third small electrical connector on the clockspring that could not be released by hand.  I had to use a small screwdriver to push down the locking tab before it would pop off.
Next, my clockspring was held in place by two Phillips head screws instead of plastic pins.
Finally, my new part  had a locking tab that kept it from rotating during installation.  I left this in place until the steering wheel was in place  This insures that the clockspring won't over-travel and fail.  Once the wheel was on the locking tab pulled right off.

The turn signal cancels now and wife is happy. :D

Night,
Ellie
Posted by Elizabeth Greene at 1:53 AM