This has been a fun weekend.  Lots of stuff in this post.

I finished Chris Kyle's book, American Sniper.  I enjoyed his stories.  The book felt conversational, not like a strict autobiography.  Here is the best quote from the book.

You know how Ramadi was won?
We went in and killed all the bad people we could find.
When we started, the decent (or potentially decent) Iraqis didn’t fear the United States; they did fear the terrorists. The U.S. told them, “We’ll make it better for you.”
The terrorists said, “We’ll cut your head off.”
Who would you fear? Who would you listen to?
When we went into Ramadi, we told the terrorists, “We’ll cut your head off. We will do whatever we have to and eliminate you.”  Not only did we get the terrorists’ attention—we got everyone’s attention. We showed we were the force to be reckoned with.  That’s where the so-called Great Awakening came. It wasn’t from kissing up to the Iraqis. It was from kicking butt.

The tribal leaders saw that we were bad-asses, and they’d better get their act together, work together, and stop accommodating the insurgents. Force moved that battle. We killed the bad guys and brought the leaders to the peace table.
That is how the world works.

I also worked on the Van some more, finishing the mile-long to-do list.  I installed a new power window motor and regulator on the driver side.  Ty is ecstatic.  Now we can get the mail and order at a drive-through again.  Yeah!  I also replaced the rear brake pads, rear calipers, and changed the brake fluid.  When we were driving back from vacation the rear brakes started dragging.  By the time we noticed the driver's rear wheel was hot enough to boil water.  I seriously thought the tire was going to catch on fire.  Not fun stuff.

To change the window regulator remove three Phillips screws from the door panel.  One is in the door opener handle behind a plastic cover.  One is in the hand grip on the arm rest.  The last one is near the bottom of the door about 3/4's of the way forward from the door edge.  Pop out the power window switch assembly with a knife or screwdriver and disconnect.  Pry off the door panel.  Disconnect the door handle rod, entry light, and power lock switch.  Remove the Speaker (4 screws).  Remove the rubber door moisture barrier gingerly.  Tape the window to the door frame so it doesn't fall in the door.  Remove the two window-to-regulator clips.  Loosen the 4 T-35 Torx screws that hold the regulator frame in.  Finally remove the bolts that hold the motor to the door.  On the other door these are attached via a little rubber bushing that disintegrated when I tried to remove it.  On this side it was held on by nigh-indestructible plastic one-way clips.  I had to resort to violence to remove them.  :/


Next take off the weather stripping between the inner door panel and the glass.  Now the regulator can come out with a small game of Twister.  Installation is pretty straightforward.

Changing the rear brake calipers is really easy.  You need four tools to do it. (Not counting the jack, jack stand, and lug wrench  to remove the wheels.).  You need a 3/8" wrench for the bleeder screw, a 17mm wrench for the brake line fitting, a 7mm Allen wrench for the guide pins, and 3/8" tubing to bleed the brakes.  Two guide pins hold on the calipers.  These have a 7mm Allen head.  I bought a 3/8" drive Allen-head socket set ($13 @ Home Depot) and these came out without issue.  There is also a 17mm head banjo bolt holding the brake line on.

Bad times.  My wrench set doesn't include 1 17mm wrench and a socket won't fit.  A 5/8 wrench fits very closely and I used that instead.  (Full disclosure, I actually used a 5/8" crowfoot socket because my 5/8 wrench is AWOL.  Dammit.

Installation:  I bought loaded calipers that came with new pads and pins already installed.  I put it in place, bolted it in, and bleed the brakes.  Magic.

Don't give me a hard time about the rusty brake rotors.  They met the spec for runout and thickness.  I checked.


Changing the Brake Fluid
This van is scraping up on 2000k miles, and the brake fluid has probably never been changed.  I siphoned as much as possible out of the master cylinder and refilled it with new DOT 4 fluid.  Then I bled the rear brakes until new clear fluid came out.  Total I extracted 22 ounces of the old fluid.  It was a dark red-black color and had unknown particles in it.  I do not regret changing it.


I bought an Auto-Zone one-(wo)man brake bleeder kit for this project.  It was around $10 and it's trash.  The adapter that connects to the bleeder screw broke after I did just one side and the magnet on the bottle is too weak to hold paper, much less a bottle of brake fluid.  I had to hop in the other car and go get some 3/8" vinyl tubing to bleed the other side.  Bad times. 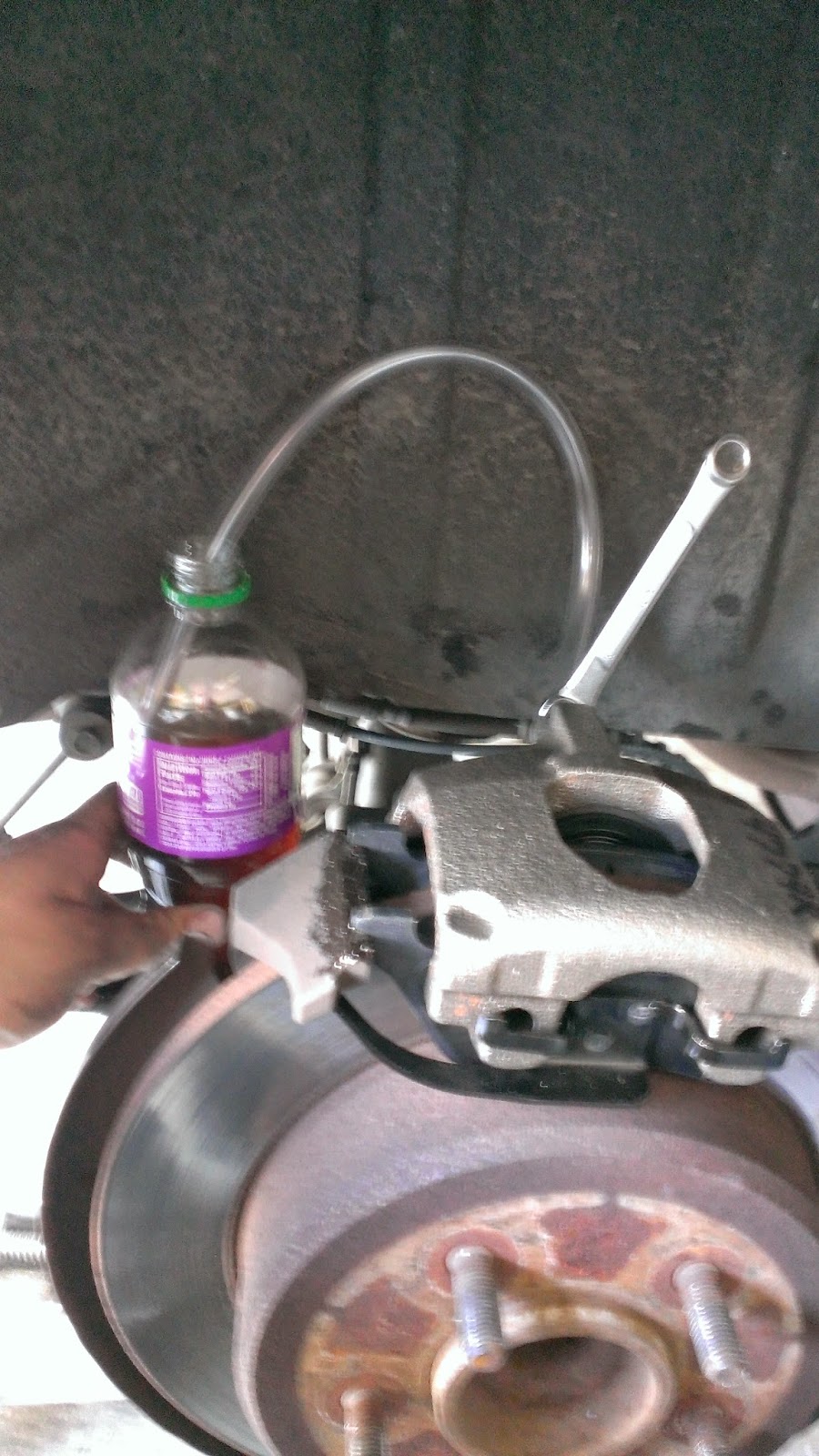 Note the dark color of the brake fluid.  It's supposed to be clear.  :(

I got the window and brake parts from Rock Auto.  I'm happy with their performance so far.  I have to figure out how to return the brake cores this week.  hopefully that won't be a PITA.

Finally, this morning I canned 11 pints of chicken for the pantry.  This is one of our convenience foods.  It's really nice to be able to pull a jar of chicken and have a meal ready in under 10 minutes. 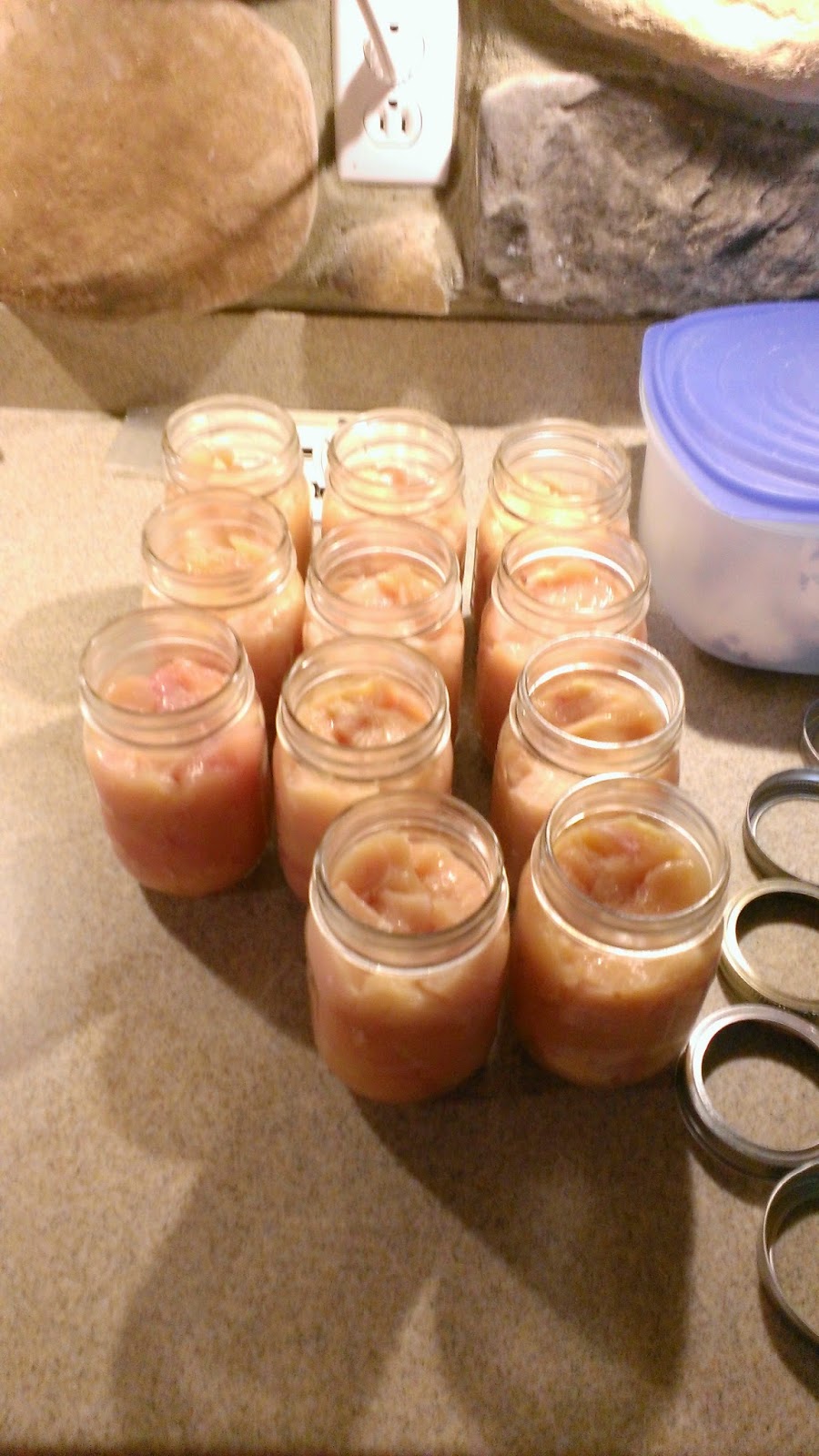 Raw Pack Chicken Pressure Canning:
Put 4" of water in the pressure canner and start heating (with the lid off.)
Chop up chicken
Put in Jars.  A pint jar usually holds a large Zaycon chicken breast.  Leave an inch between the top of the meat and the top of the jar.
Use a tool (i.e. a spatula handle) to poke out the air bubbles.

(I used 12 breasts in 11 jars.)
Optionally add 1/2 teaspoon of salt to each jar.  (I've had it with and without, it's better with.)
Wipe of the jar tops.
Put the Lids and finger tight bands on the jars.
Put jars in the canner.
Bring the canner up to 15 PSI and process for 75 minutes for pints.
Let the canner cool down to room temperature.
The next day take the bands off and store your jars.  All done.  Chicken can be eaten right from the jar.

Bedtime, have to be back up for work in 6 and-a-half hours.  Merp.
Posted by Elizabeth Greene at 12:13 AM