I love my shiny red lawnmower.  I got it, not running, for $100.  :D  The carb float was stuck and the engine was full of gas.  I fixed it, and it's worked great ever since.

I straightened them so I could finish mowing, but they're borked.  Here's how to change them.

The TLDR procedure is
1. Remove the deck from the mower.
2. Remove and replace the blades.

Removing the deck on this mower is so easy.  (This is why I love this mower.)
Turn the mower off.  (I suppose you could do it with the mower running, if you had a particularly gruesome death wish.)(Need help? In the U.S., call 1-800-273-8255 for the National Suicide Prevention Lifeline)
Disengage the blades.
Lower the deck to the lowest position.
There are spring loaded handles on the left and right side of the rear of the deck.  Pull those to release the rear. 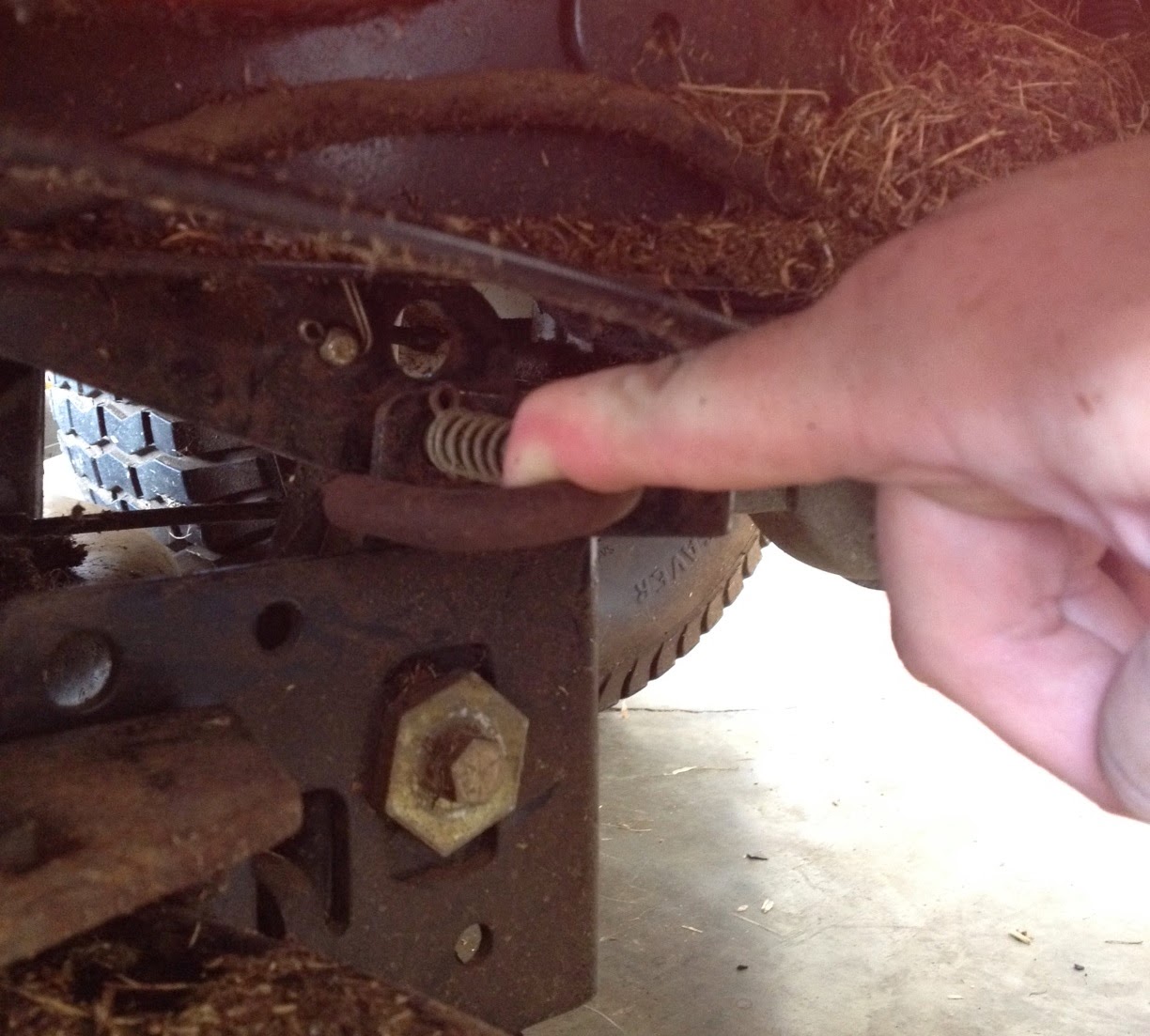 There is a bracket that holds the belt on.  There is a single bolt that holds it in place.  It comes off with a 13mm socket.   I realized after the fact that I could finagle the belt off without removing the bracket.  That will save you a little time.

The last thing to remove is the front support.  To do this, raise the deck as high as possible.  (Just move the control lever.  The deck won't move, you disconnected it.)  Then roll the mower backwards a couple of inches.  The bar lifts right out and you can slide the deck out the right side of the mower. 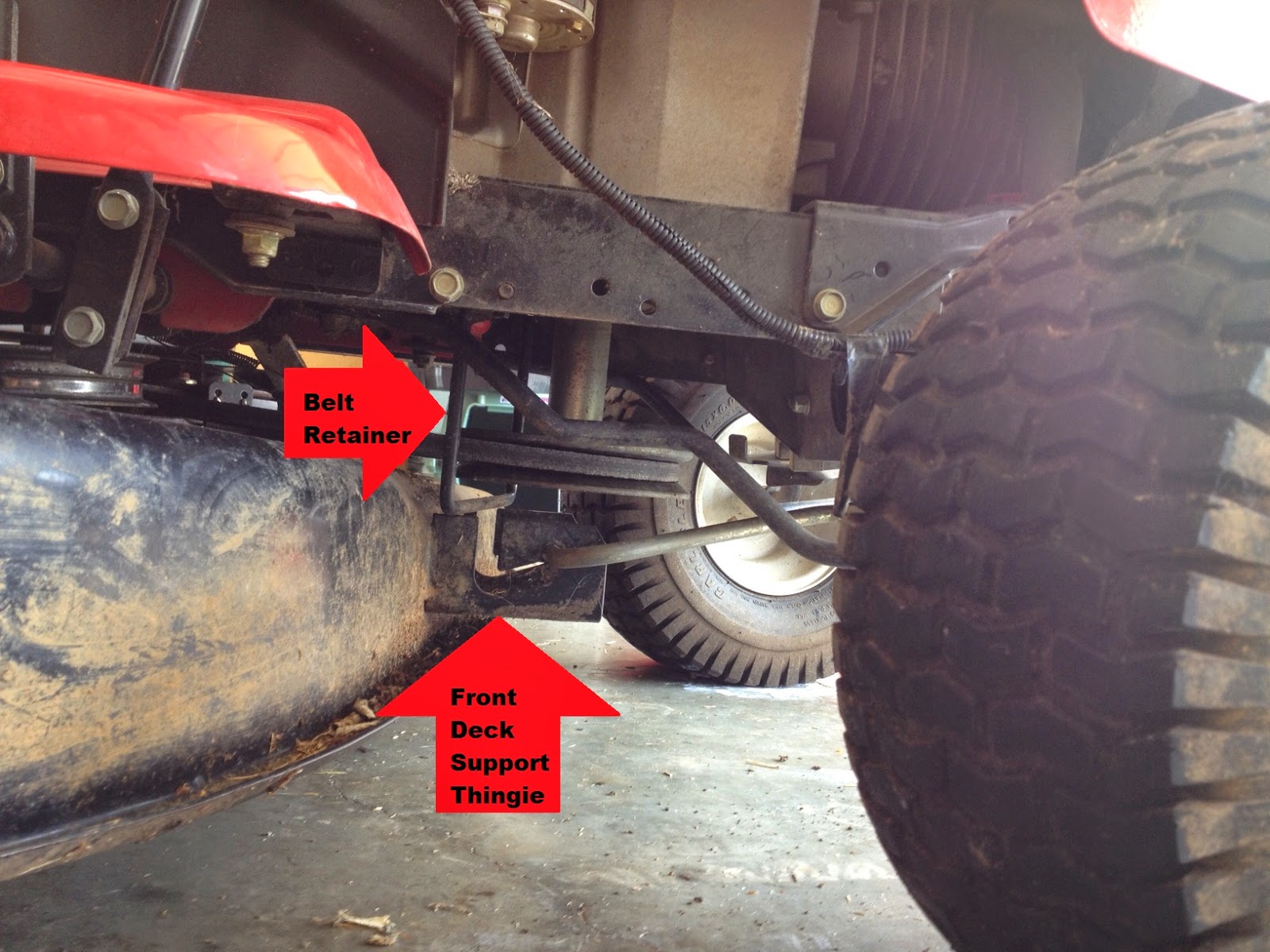 The deck is still connected to the blade engagement lever by a cable, which I chose not to remove.  It is possible to unhook this with a cotter key and removing one spring, if you want to completely remove the deck.  I just pulled it out and propped it up to change the blades.

Changing the blades is -really easy- if you have an impact wrench and air compressor.  Most people don't.  That makes the process a little more complicated.  The big nuts on the bottom of the blades fit a 24mm socket.  The trick is keeping the blade and spindle from turning while you undo the nut.

My solution is to use a piece of 2x4 to hold the blade.  This works great! 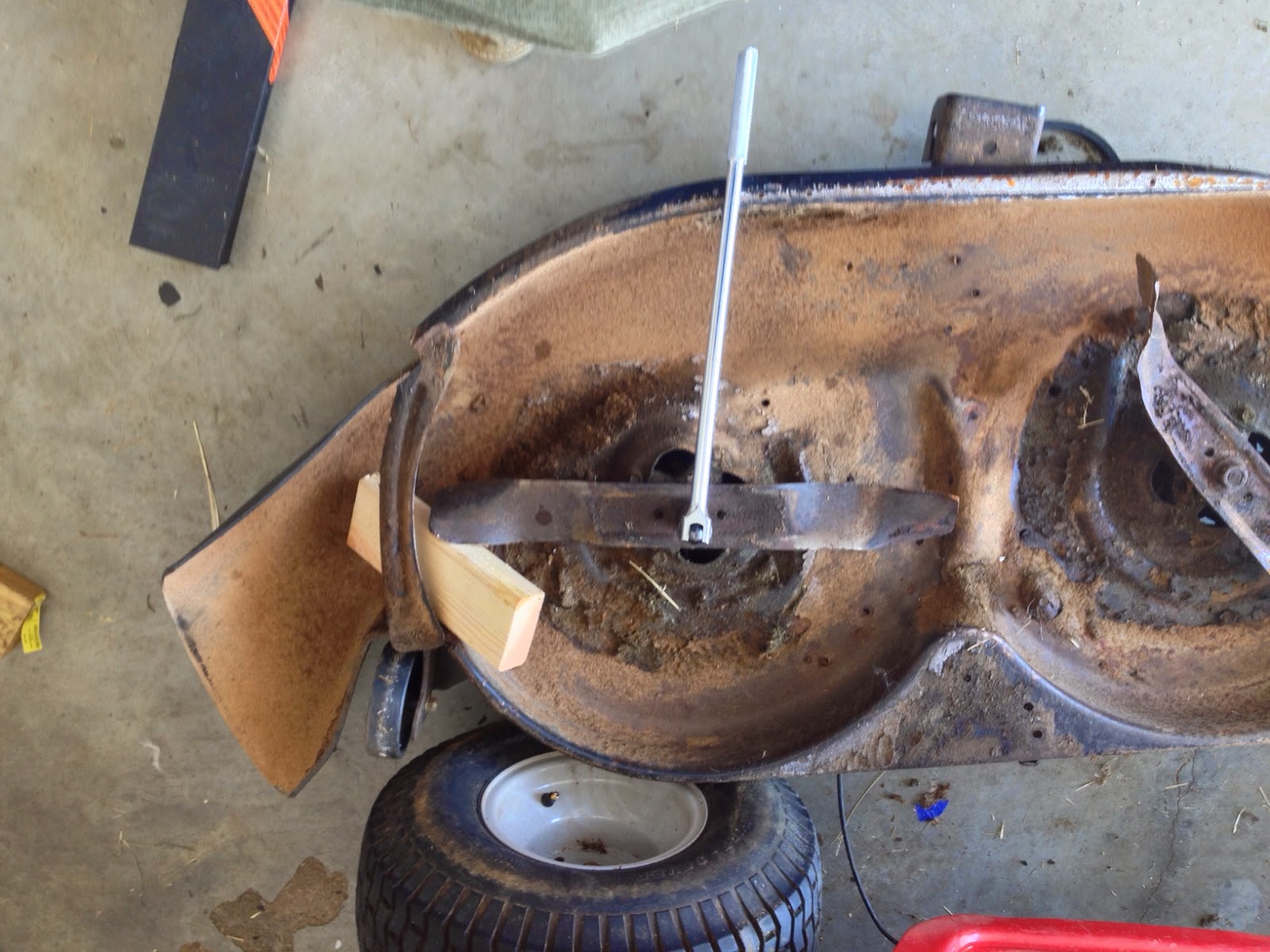 This first blade came off really easily.  The second one did not.  When this happens, you can use a pipe for leverage. 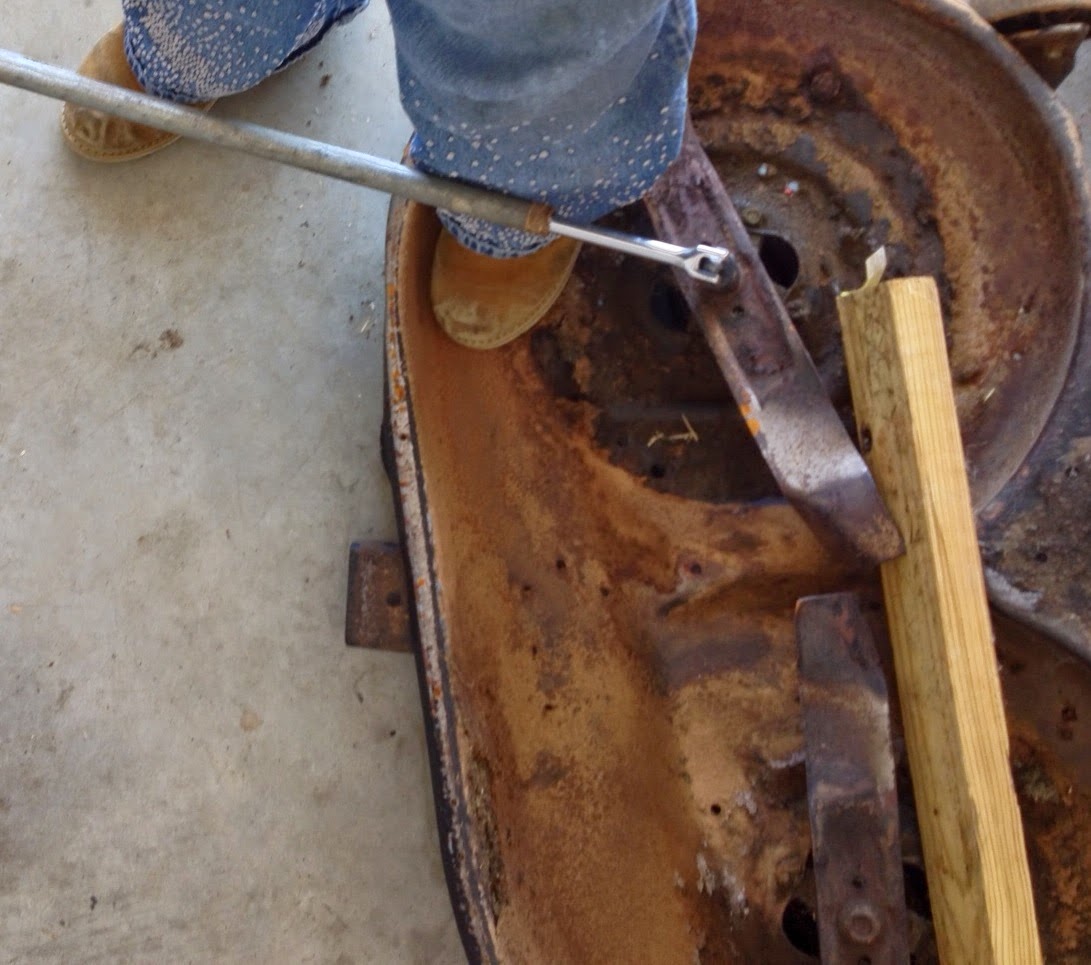 Trivia: This Pipe's name is "Piper Something".  It's named in honor of my Brother-in-Law, who used to constantly ask me to "Go get a pipe or something."

Very rarely you'll have a blade where the spindle turns after you get the nut backed away from the blade.  This happened on the other blade.  If you had another 24mm socket or wrench (because those just grow on trees) you could put that on the spindle nut to keep it from turning.  I didn't have this option, so I put a pipe wrench on it.  This is not a good or elegant solution. :/ 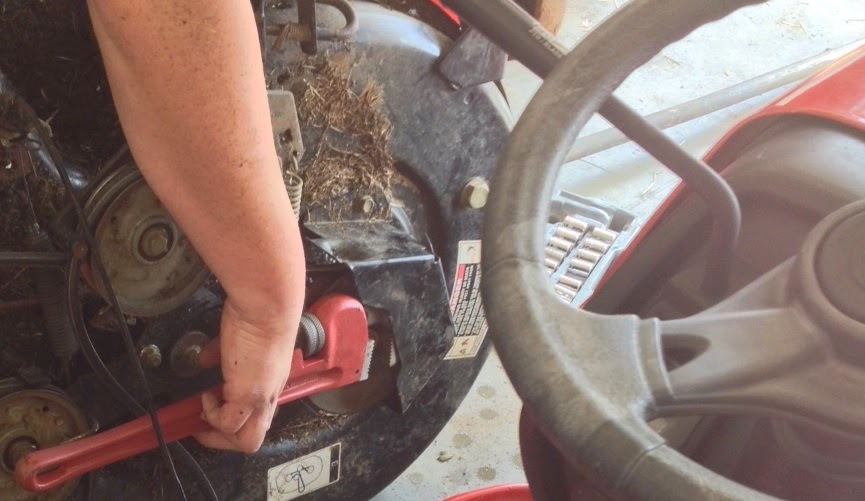 Putting it back together is straightforward.  You don't need to get the blade nuts insanely tight, as they will self-tighten as you mow. 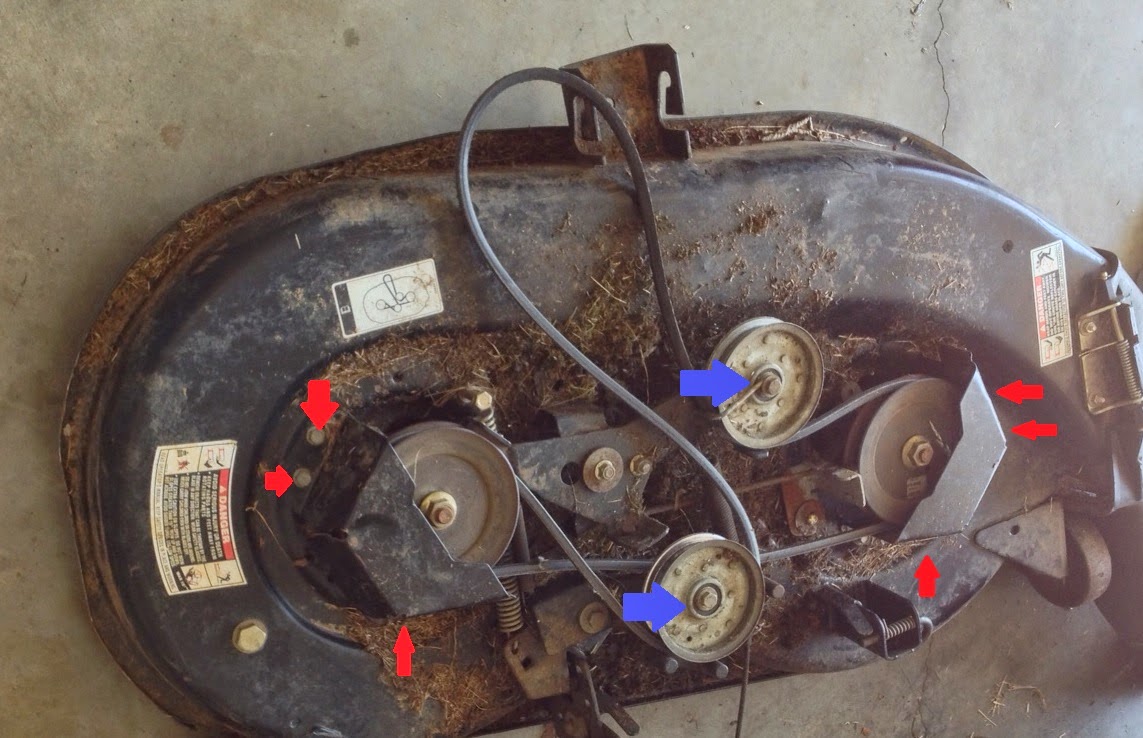 While you have the deck off, it's a good time to change the belt.  I don't have a good picture of this, but can give you the process.  On the top of the deck there are two safety covers (left and right.)  Both are held on with 3 13mm head bolts (in Red).  Remove them.  Also remove the two center idler pulleys (Blue) with a 14mm wrench and socket.  Route the belt according to the sticker and put it all back together.

Posted by Elizabeth Greene at 7:16 PM