Yeah!  The new rotor kit came with the rotor head, a new swash plate, three blades, linkages, and no instructions.  (CRAP!)  I'm figuring this out as I go.  Replacing the rotor and swash plate was pretty easy once I knew how.  Here are the instructions I wish were in that package.

How to install a Flybarless Metal Main Rotor Head & 3 Blades for Align T-REX 450 Helicopter RH450 on a Raw Friction Nx8500 Helicopter to convert it from 2 blade to 3 blade.

Update: The stock servos are not strong enough for the upgrade from 2 blade to 3 blade.  You need something stronger than 9 gram servos.  I'm still testing to see what works.

1. Pop the canopy off the helicopter and pull the battery.
2. Unscrew the one bolt and nut that holds the rotor head on.
3. Remove the two allen bolts that hold the behind-the-swash-plate plastic alignment thingie. 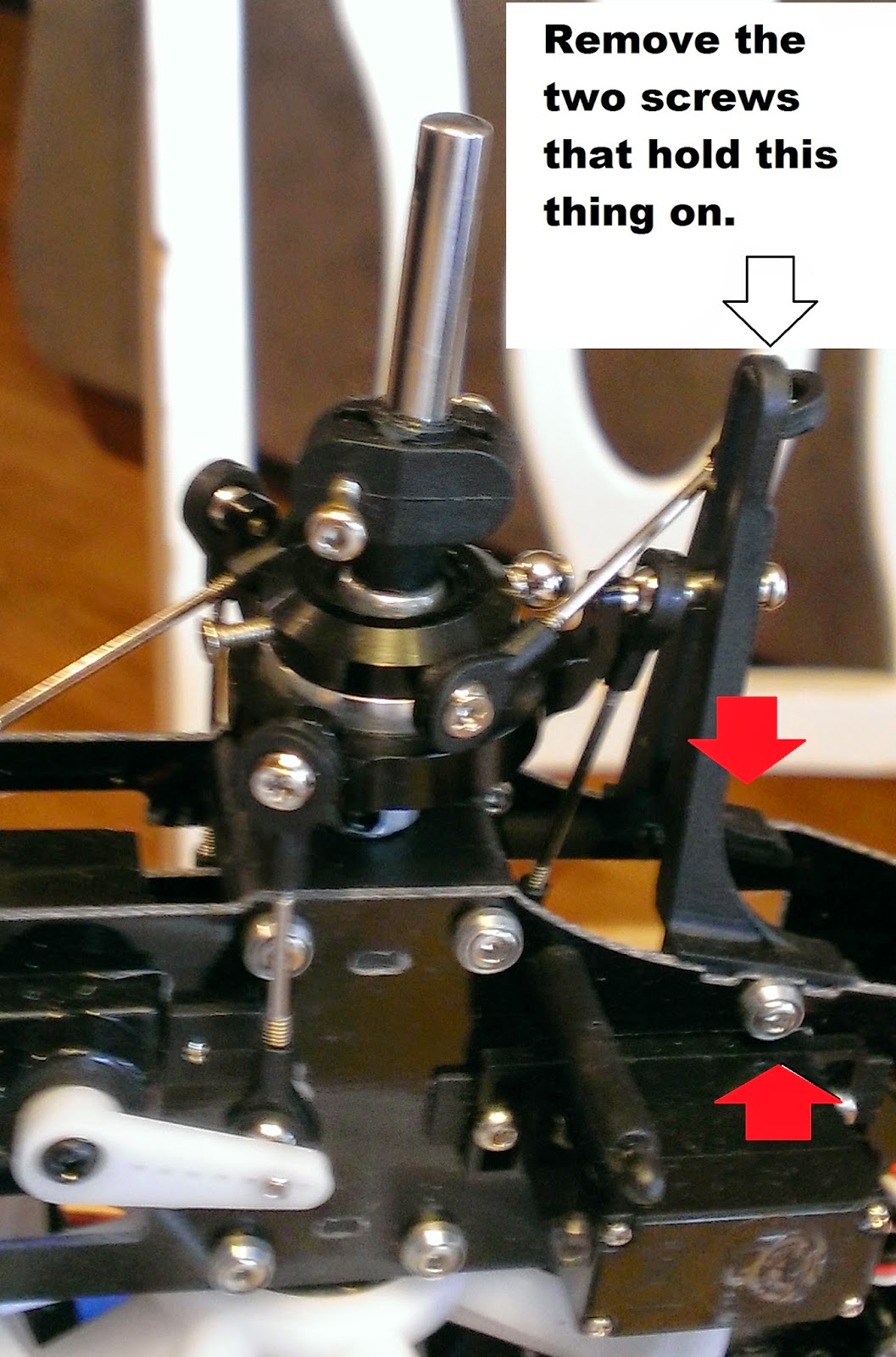 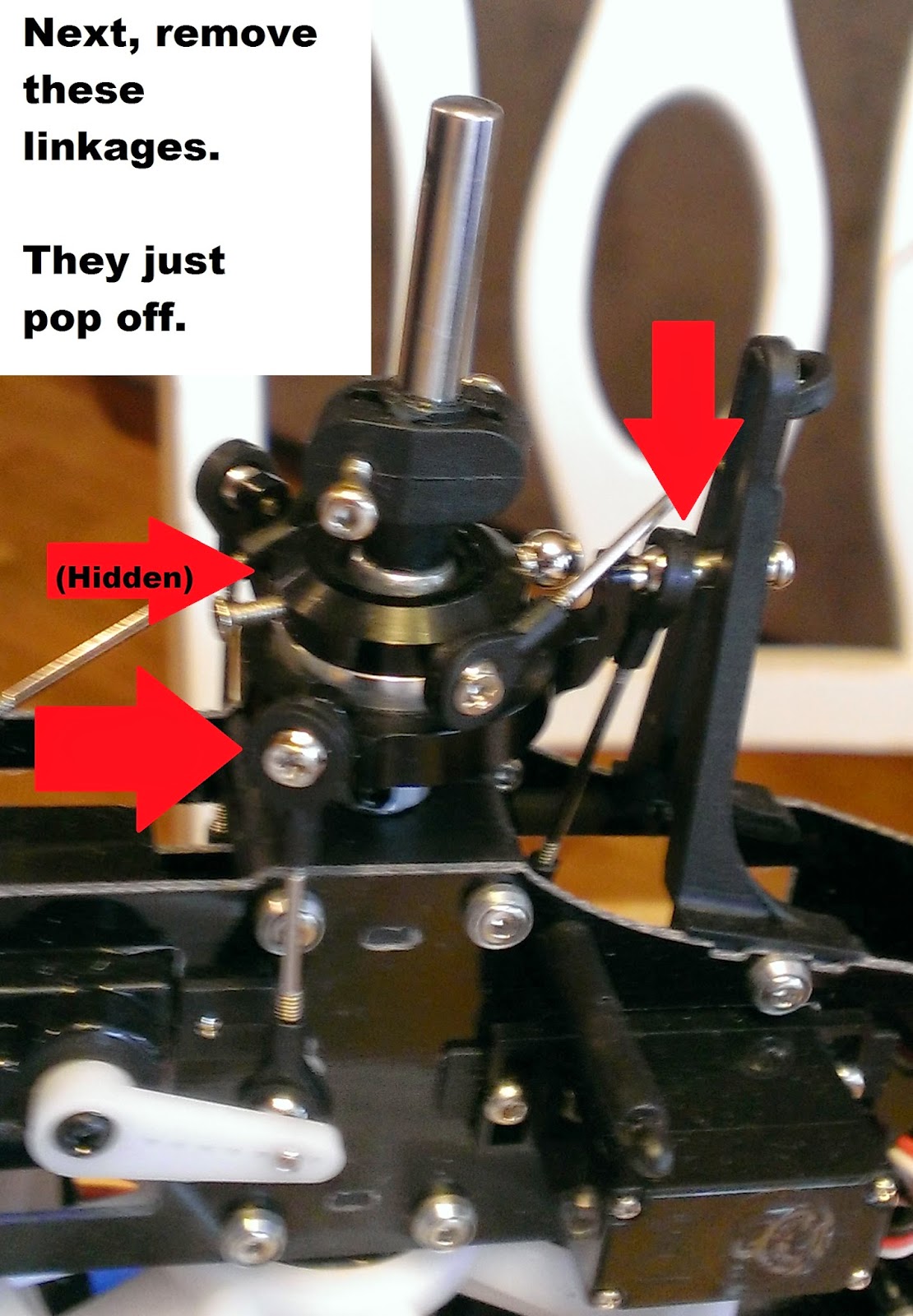 4.  The old rotor, linkages, swash plate, washout arm fragments, and washout base will come out as an assembly.  Magic.

Too bad I didn't do that.  I disassembled half the heli trying to get the main shaft out to replace it with the new one.  The new one wasn't long enough, so I disassembled it AGAIN to put the old one back in.   Sigh.  Did I mention there were no instructions?

You'd think that now you put the rotor head on.  No.  Before you do that, you want to make sure the swash plate is reasonably level.  It should be, since you are reusing the old heli linkages.  I missed this step, but it didn't hurt anything.


11. Slide on the new rotor head with the control arms pointing in the direction of rotation.  Install the allen bolt and nut that holds the rotor head on.

Curious trivia.  On big helicopters this is referred to as the Jesus nut.  i.e. If it fails, you meet Jesus.


12. Snap on the linkages from the inner part of the swash plate to the rotor head.  If you were careful to make them the same length, it will be level now too.  Magic!
13. Loosen the one allen bolt on on the washout arm, and rotate it so that the linkages point straight up and down, instead of being at an angle.

14. Check the new blades to make sure they are balanced.  Mine were.

15. Install the new rotor blades, with the fatter edge pointing at the direction of rotation.  The nuts should be snug, but the blades should be able to move freely back and forth.

More trivia.  If performed while tired, it is possible for a reasonably intelligent person to put 2 of these on the right way, and one backwards.  (Insert emoticon for shame here.)

When we tested it, one of the servos was really jittery, and another was dead.


The new rotor head is much heavier than the old one AND has no flybar.

Did he kill them in the crash?  Did I kill it during the repair?  Is the new rotor too heavy for the stock servos?  I have no idea.

I think the crash broke them, but I'm not sure.  Let me get some new servos and I will be the guinea pig.  I'll write about it in my next post.

Update: I installed 3 new 9 gram servos and one started twitching within minutes.  The stock servos are NOT strong enough for this rotor head and must be upgraded when you change the rotor head.
Posted by Elizabeth Greene at 11:30 PM