DiskProbe (DskProbe.exe) is a low level disk sector editor published by Microsoft.  It was released originally as part of the Windows support tools for Windows NT 4.  It is a really handy tool for rebuilding an erased partition table, fix a busted MBR, fix a partition's boot sector, or just poke around on the disk.

Here is how you get a version that will run on Windows 7/8+ 32 and 64 bit, straight from Microsoft, malware free. 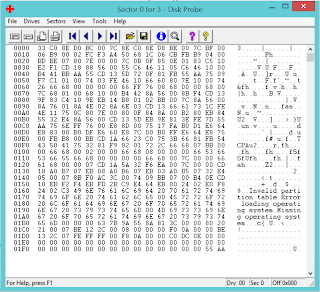 If you really want to dig into this, take a look at Chapter 12 "File Systems" of the Windows Internals books.  In the current edition this chapter is in the second book.

The learning curve on using this is steep, and it's as user friendly as an angry porcupine.  You can very easily irreparably lose data with it.  You can also fix a lot of things and be a rock star.

Email ThisBlogThis!Share to TwitterShare to FacebookShare to Pinterest
Labels: DiskProbe, DskProbe.exe, IT