What I'm working on: The emDrive and playing with physics.

I read about this device, The emDrive. 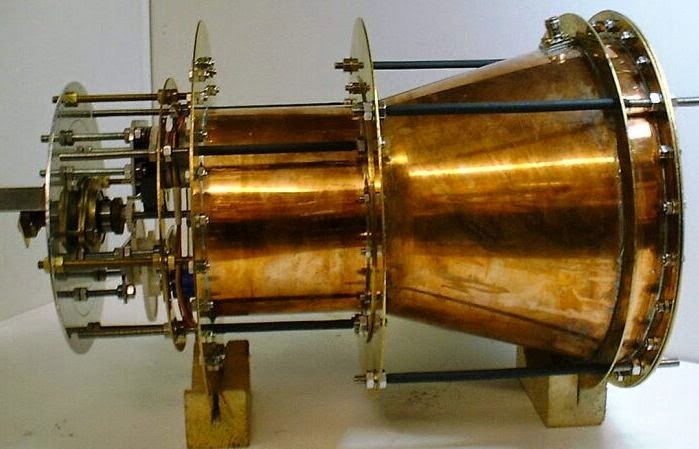 This device is.. claims to be.. a reactionless thruster.  It pushes a spacecraft without throwing anything out of the spacecraft.  As long as you keep adding energy, i.e from solar cells or a reactor, it keeps accelerating the spacecraft.  This is revolutionary, and if true it has the potential to change human civilization as much as the printing press, steam engine, and Internet.  It is the enabling technology we need to colonize other worlds.  It looks complicated, but it really isn't.  It is an asymmetrical microwave resonator.  In English, this is a box that echoes microwaves.

Exactly why it creates thrust is up for debate.  The author proposes a that it is caused by radiation pressure.  Radiation pressure is the incredibly tiny force from a photon bouncing off of a surface.  Two factors in this design amplify and direct this tiny force to make it useful.  First, the photons bounce a lot.  Microwave resonators can bounce the same photons around thousands of times before they are absorbed.  Second, because it is cone shaped, one end is larger and absorbs more energy than the other.  This difference in energy absorption creates thrust.


The problem with this device is that physics, as we understand it, says it's impossible.  The law of Conservation of Momentum says that in a closed system is not affected by external forces the total linear momentum of the system cannot change.  This device should not work.

So how do I fit?  I think this is going to change the world, and I want in.

To design one of these I need to design a cone shaped microwave resonator.  This requires knowledge in Microwave engineering.  This entire discipline is built on Maxwell's Equations.  (specifically, the 3 dimensional wave equation with boundary conditions.  These equations are written in the language of vector calculus.  The highest math I've taken formally is Algebra 2 in high school.  I'm now about 1/2 done teaching myself Single Variable Calculus.  After that I can do multi-variable calculus and finally vector calculus.  Then I can -start- work.  It is very frustrating to stand at a locked door of opportunity and thumb-twiddle while learning the secrets to opening the door.  I'm coming, door.  I'm coming.

The system could be made even simpler.  The counterweight could be fixed on a rotating disk and accelerated during half of the rotation, then decelerated during the opposite half.  This acceleration and deceleration moves the w term of the force equation around and should "make it go".

Unfortunately, a patent search indicates that this type of device has been invented and patented over a dozen times.  A search of the internet indicates that it doesn't actually "work".

Yep, that's what I'm doing.  Wasting time repeating the failures of others.  (And working and playing battlefield 3 (Poorly))

The time hasn't been a complete loss.  I learned a great deal about working in Acrylic.  I used a scroll saw to make plastic gears.  That was pretty cool and worth the time invested.

I have some other ideas rolling around too.  Here's one.  This is the thrust equation for a rocket nozzle. (From Aerospace.org)

This says that the force is equal to the mass flow rate times the exit velocity plus the difference in nozzle exit pressure and ambient pressure times the area of the exit.

In a system that recycled the reaction mass, that first term would net out to zero.  Question: Is it possible to fiddle about with that second term to make thrust?

I'm sure someone has already tried it and failed, but I'll try anyway. (and probably fail too.)

Posted by Elizabeth Greene at 12:35 AM