Changed the starter on a 2007 Honda Civic 1.8 a couple of weekends ago. 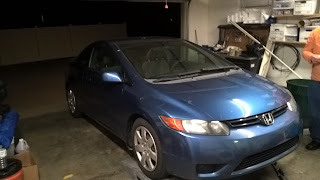 Removal should be straightforward.  It wasn't.  This car fought me every single step of the way.  Not fun at all.
This job is under the car.

Tips I wish I'd known....
Reach up through the hump hole where the exhaust connector runs to unclip the wires, and unclip one more than you need.  That gives you slack to remove the starter easier.

Use several socket extensions to reach the starter bolts from the passenger side wheel well.

This car has a lock on the radio and you have to put in a code to make it work again after you disconnect the battery.  If you have a memory saver, use it.

Don't drop the starter on your face.

Pull the car all the way into the garage so you can close the door when it starts snowing.

Gingerly tighten the electrical connector on the solenoid.  The solenoid is plastic and will snap right off.  I don't think I ogre-tightened it, but the broken plastic widget looks mighty incriminating.

One last thing, and this might just be me being a desk-dwelling weakling.  The starter bolts are spec'd at 33 foot pounds.  Either mine were seized in place or a lot tighter than this.  I had an <expletive> of a time getting them off.

Posted by Elizabeth Greene at 11:40 AM